Some of you may have heard the 4th book in my paranormal romance series is releasing this Friday, June 22nd! It’s called DESTINY BEWITCHED and it will be available for all e-readers. So here’s my shameless plug to get you to buy my book.

10 reasons you should buy my book:

Her sister had been dragged away to some hideous supernatural version of Fight Club and she was daydreaming about the love of a demon. Someone ought to smack her.

“Ow!” She rubbed her forehead where she’d just bumped it on a low hanging tree root. “Stupid karma.”

They were panting and sweating, bruised and bloody and desperate as hell. He looked into her eyes, a stark look of pure lust – dark and sensual but full of possession. He was taking his war prize. And she was it.

Then the worg charged. There was no way her lame protection circle would do a lick of good against such a powerful attack. So she did what every other red-blooded American girl would. She ran like hell.

Everything he wanted in a woman, he’d found in Samantha. Courage, intelligence, a sense of humor, a kind heart. She was that and more. He hadn’t known he liked freckles that appeared in the sunlight. Or waking to a husky voice, thick with sleep, in the morning. Or the little spot between two eyebrows that crinkled with deep thought. Flirty smiles, playful surrender in the bedroom, a cute, spankable ass, amber eyes, curly hair he wanted to grab in handfuls – gods, everything!

More than once, she had stared out the window, wishing, hoping he’d miraculously appear, wearing that sexy half-grin and flashing his smoldering eyes. But he never appeared. And when the vision faded, it left her crumpled in a ball, fighting back deep, angry sobs.

A giant…dog would’ve been an understatement, flew out of the shadowy corner and landed on thick paws in front of her. Pitch black in color, covered in bulging muscle, it bared its oversized teeth and snarled. Holy mutant flea bag!

She crab-walked backward a few feet, never taking her eyes off the beast, until she felt her sword under her hand. “Nice doggie.” The thing’s eyes glowed red as it stared at her weapon. “Nice possessed doggie.”

7.) If you buy it opening weekend you’ll be supporting the charity Operation Smile, which sends surgeons to third-world countries to repair the cleft lip/palate of children who’ve been ostracized. I’m donating 10% of royalties from opening weekend in honor of my son.

8.) You get to meet Aedan, rockin’ hero from a later book in the series.

Aedan spoke around mouthfuls of food. “I tried to usurp the Unseelie throne,” he said unapologetically. “I’m down here learning my lesson. Repenting. All that shit.”

9.) There’s a reprise of characters from earlier books.

Sage? How she’d changed from the insecure girl Sam had once met. The stone guard ran toward the queen. With a simple squeeze of her fist, they crumbled to dust. She huffed as if blowing a kiss and a gust of wind swept through the arena, blowing the dust into the air. The mountain shook again, chunks of rock plunged to the ground. She was bringing down the whole damn place.

“You shouldn’t tease a demon. We have different rules about payback.”

She arched a brow. “Thought you weren’t a demon?”

He kissed each peak. “In bed, I am.” Before she could make another smart-ass remark, he nibbled his way down her side, holding her down when she squirmed.

At the apex of her thighs, he looked up and grinned. “Lie still, love, so I can make you scream.”

Still not convinced? How about this: it costs less than a cup of coffee at Starbucks, it can be read as a stand-alone, and advanced reviews  are awesome.

Here’s the cover and the blurb. Remember the date, June 22nd! 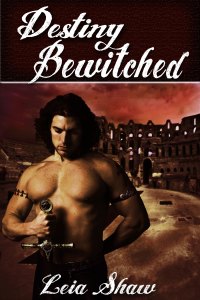 Deemed “trailer trash” by humans and the daughter of the most disgraceful family of witches and warlocks since the Puritan age, Samantha is used to fighting her own battles. When her younger sister is taken to the Underworld, Sam doesn’t hesitate to rescue her. To survive the harsh land, she makes a deal with a demon — the most dangerous of  creatures in the realm. Even with those lustrous horns, Geo is as hot as the hell she’s stuck in. Fighting nasty beasts in a supernatural version of the gladiator games is easy compared to falling in love with a man who has no future to offer.