Tricking the Eye, Treating the Imagination by Inanna Arthen

When I was a kid, I loved Halloween more than Christmas. I grew up in less paranoid times—the 1960s in Spokane, Washington. No one worried much about tampered treats, and we kids had free rein to wander unsupervised, even at night. The schools weren’t entangled in a million restrictions for fear of offending anyone or being accused of promoting Satanism. We all wore our costumes to school the day before Halloween.

I was the relentlessly bullied school fat kid. I loved the opportunity to be something and someone else, something with an exotic appearance and strange powers, something different. Of course, I liked trick-or-treating and reaping all the free candy, but I was never as dedicated as my sister, who methodically paced every street of the surrounding neighborhoods and came home with at least fifty percent more loot than I did. But that was because Halloween night meant freedom for more than collecting candy. It meant being unrecognized not just as myself, but as a girl—caught misbehaving and chewed out by an old gentleman one year, my friend and I were addressed as “you boys.” It meant being able to gather in a vacant lot under an almost full moon to howl and dance, pretending to be werewolves. It meant being able to dress up and role play for a night. Trick-or-treating was an excuse to be out shape-shifting, and the homeowners passing out candy were my audience.

I was more interested in dressing as something fantastic than horrible, although in sixth grade I made myself a gruesome revenant-type vampire costume with ragged, fluttering shrouds, rubber fangs and a face running with fake blood. The year before I was an undersea-dwelling “Atlantean” dressed all in green with every inch of exposed skin dyed with green food coloring.

Until I became seriously involved with the Massachusetts Pagan community, I continued to pull out the stops on Halloween night. I would carve half a dozen jack-o-lanterns. My signature creation was a huge pumpkin with half its face melting on one side. Several years I dressed as a vampire to answer the door, with a long black gown and somewhat more sophisticated makeup than my grade school days. I got so skilled at shading on pale base and dark shadowing that I had to tone it down, as I was scaring the younger kids and even giving my dad the shudders.

I don’t celebrate secular Halloween anymore. Samhain is a sacred holiday for me, and I observe it at the astrological cross-quarter, usually November 7. For twenty-five years I’ve lived on a dark country road too dangerous for trick-or-treaters. I sojourn in another reality through my fiction now, and I’ve honed my craft to make it as easy as possible for others to join me. My writing is best described as “magical realism,” because I start with the world we all [think we] know, and then weave in elements that most people assume are fantasy. Not all those elements come from my creative imagination. As a psychic, magic-worker and life-long scholar of vampire folklore, I’ve had some experiences most people wouldn’t believe, and I leave it to my readers to decide which parts of my books are invented and which aren’t. I do extensive research for all of them.

So join me this Halloween season in the world of The Vampires of New England—Book 3, All the Shadows of the Rainbow,was just released after two years of intensive research on the 1960s. As with the best costumes, you can only guess at how much you’re seeing is real. 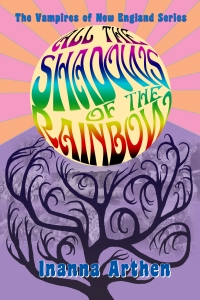 Inanna Arthen (Vyrdolak) is an artist, actor, UU minister and author of  The Vampires of New England Series: Mortal Touch (2007),The Longer the Fall (2010) and All the Shadows of the Rainbow (2013). She runs the independent press By Light Unseen Media (bylightunseenmedia.com). She is a member of New England Horror Writers, Broad Universe, IPNE and IBPA, and a contributor to Blogcritics.org. For more, see inannaarthen.com.

All the Shadows of the Rainbow (September, 2013)

Available in paperback, hardcover, Kindle, epub and PDF. All editions are available directly from the publisher, or from online retailers. Ask your local independent bookstore to order your copy for you!

Set in the period of American history from 1955 through 1971, All the Shadows of the Rainbow begins immediately after the conclusion of 2010′s The Longer the Fall, as new vampire Diana Chilton returns to civilization from the Maine woods. Reconnecting with people and places from her old life for the first time, she travels to Boston for the spring Beltene rites and encounters a friend from her distant past, Jack Garrett. Jack is the only magician Diana meets who recognizes her as a vampire. He suggests that the two of them pursue the dream that had originally drawn her to Maine: creating a magical group that will manipulate people and events to catalyze social change. Not until the group breaks up after a devastating reality check in 1963 does Diana finally succeed in finding another vampire, Troy Stevenson, who is helping a new commune of organic farmers get established in a rambling farmhouse in Sheridan, Massachusetts. Diana loves the commune—and Troy—but the work she did with Jack is far from finished.

Contest: Winner will receive copies of both All the Shadows of the Rainbow and The Longer the Fall, in paperback editions or the ebook format of your choice. Contest is open world-wide and without restrictions. Void where prohibited by law.  Leave a comment to this post and answer this question:

“If you had the power to magically influence what is going on in the world, or your country, right now, would you use that power? If you would, what would you change?”

2 Responses to Tricking the Eye, Treating the Imagination by Inanna Arthen